With the projected exodus of Bitcoin and other Altcoin mining operations from certain Asian countries the company believes there is a tremendous opportunity to capitalize on the geographical shift of these operations. This has lead the company reserve some capacity in its proposed BlockchainDome project in Quebec for mining equipment manufacturers and large scale mining operators which are searching for rapid deployment (or re-deployment) and an efficient, low cost solution to host their gear.

United Blockchain has therefore reached out to certain manufacturers and operators with a request for proposal for rapid hosting on a turnkey basis in facilities that would be located throughout Quebec. Operators will pay direct Hydro-Quebec power costs at US$0.0276 (based on the current CD/USD exchange rate) plus power and remunerate UnitedCorp based on a per TeraHash capacity per type of coin mined.

Interested parties register and obtain copies of the RFP at www.unitedcorp.com/rfp

As of today the company has invited several manufacturers and operators and expects to continue the soliciting proposals for its consideration until Feb 15th, 2018. The company is of the opinion that the BlockchainDomes represent a considerable advantage versus leasing/building then adapting a 2-10 megawatt traditional “brick and mortar” facility. The UnitedCorp approach increases the feasibility of operations by lowering capital expenditures, eliminating multi-year lease commitments, and other obligations – hard costs which are over and above direct costs related to electricity.

The UnitedCorp BlockchainDome has been designed for large scale ASIC (application-specific integrated circuit chip) and GPU (graphics processing unit) mining operations where efficiency and low cost operations are a priority. The BlockchainDomes are also particularly suited for situations where rapid cluster deployment is required as they can be erected and commissioned in a matter of weeks rather than up to a year using the traditional “Bricks and Mortar” approach.  UnitedCorp believes that the combination of low cost of operation, rapid deployment and low capital cost will result in BlockchainDomes providing one of the lowest overall Total Cost of Ownership (TCO) in the mining industry and the most efficient cooling solution for high density power mining operation. 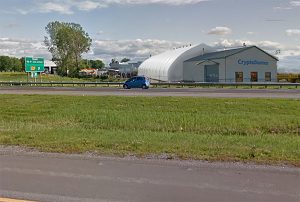 The BlockchainDomes utilize a proprietary passive cooling ground-coupled heat-exchanger technology which provides them with a highly efficient cooling solution for high-density mining operations which contain some of the hottest running computers in the world. Operational limitations are often encountered in mining operations with inadequate cooling as chips heat from the heavy processing required for mining causing a protective throttling back of 5-25% processing power to keep the systems from overheating.  This throttling back reduces the efficiency of the operation and therefore reduced mining output. While active cooling through air conditioning and/or power venting can be used in traditional bricks and mortar mines facilities, this adds significantly to the cost of operations and reduces their profitability.

The BlockchainDomes utilize some 1,300 feet of subterranean 36 inch diameter conduits which extend away from the dome on each side for a total of 9,200 cubic feet of air intake and are extendable if required. Surface air is drawn into the conduits and through air filters as a result of the negative pressure created within rig enclosures and from the overall chimney effect within the dome. The conduits are designed with a corrugated external surface to provide enhanced surface for thermal transfer with the ground, and a smooth internal surface for better laminar air flow and reduced air turbulence.

Warm surface air passing through the conduits is cooled naturally to 55 degrees Fahrenheit (the year round ground temperature) over the length of the pipe run as a result of solid-to-air and air-to-air heat exchange. The air then flows to the underside of the mining rigs which are encased in below grade sealed enclosures. The negative dome pressure is created through a combination of the heat rising from the mining rigs (the “chimney effect”), the processor cooling fans and from 40 passive air turbines located at the apex of the dome.  At full capacity, air is exhausted from the dome at some 236,000 cubic feet per minute (CFM) without external wind. Just a 5 miles per hour wind factor increases the exhaust rate by 50% to 300,000 CFM.

BlockchainDomes are designed specifically to keep the heat generating processors at an optimal temperature through passive cooling. This includes an emphasis on laminar flow to reduce turbulence and an air path which reduces resistance. One of the shortcomings of most active cooling systems is that they use horizontal air flows which are less effective at cooling due to the inefficient flow of air. In addition, the typical stacking configuration used for the servers means that servers on upper racks receive hot air from servers in lower racks. However with the BlockchainDome all mining equipment is installed in the negative air pressure enclosure with vertical air flow intake which brings cool air from the Canadian well intake from the ground to the underside of the enclosure for a direct vertical air movement inside the dome. Therefore air always moves in a natural direction. Since each mining rig requires some 200 CFM (cubic feet per minute) of cool air, each fully populated dome requires an air exchange of 200,000 CFM, well below the draw of the passive turbines. As a result, there is no need for air conditioning or electro-mechanical cooling.

“Our calculations regarding the overall productivity and efficiency of the BlockchainDomes project that we will have a significant competitive advantage over traditional ‘bricks and mortar’ installations that rely on active cooling systems and we are targeting total cost of ownership to be some 20-30% less.” stated Benoit Laliberte, President of UnitedCorp, “This will not only be due to the reduced cost of electricity but also takes into account amortization of capital costs when compared to other approaches.”

Established in 1992, United American Corp is a Florida-based development and management company focusing on telecommunications technologies. The company currently holds the rights to manage a portfolio of patents and proprietary technology in telecommunications, social media and more recently in Blockchain PSTN technology.

News
Archives
Sign up to our Newsletter
Back To Top